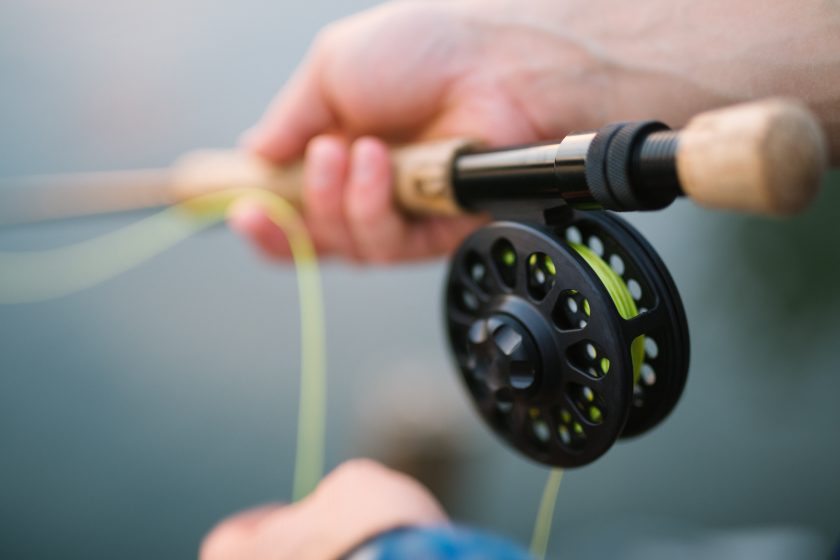 While saltwater fly fishing is all about getting good casts and the excitement of the fight, one of your most important purchases (aside from your rod) is the reel. Most reels used in this kind of ‘extreme’ fishing are single action reels. In this case, single action reels are a better fit than multiplier, as multiplier reels tend to be pricey and have more moving parts, which can complicate things quickly.

In single action reels, you have the choice between direct drive and anti-reverse reels.  There difference is how the reel releases line from the spool. In fly fishing, direct drive is the most popular (this is where the handle spins backwards when line is released). This makes it easy for the fisherman to tell how much line is going out and how much they’re pulling back in.

Most of the time you won’t be trying to reel in line from anything swimming at high speeds, but if you are, be careful with your handle. When it’s spinning that quickly, it can be dangerous to anything it comes into contact with (fingers in particular). This is where anti-reverse reels come in.  The handle on an anti-reverse reel stays stationary as line is striped away from the reel. For lighter fish, the direct drive is a good choice. With larger fish, both have their pros and cons; when you set the drag lightly on anti-reverse reels, they have a tendency to slip when reeling the line in.

Regardless of the reel you choose, an efficient drag system is one of the most important parts of the reel in saltwater fly fishing. Saltwater fish are generally stronger and faster than freshwater fish, so they require a better, smoother drag for a fun fight. These days, a quality drag system isn’t too hard to get your hands on; if you’re buying from a brand with a good reputation, you likely won’t even have to think about it.

Saltwater fly reels come in a variety of sizes, and just like freshwater reels, they are sized according to what weight line they are made for. For this activity, reel size is crucial because large reels have a greater diameter of line on the spool, meaning you’ll be able to pull in more line per crank of the reel. This becomes important when you’re fighting fish that may take out hundreds of yards of line. The size of the reel depends on the fish you’re targeting and how much line and backing you plan to use in getting it out of the water. Something like a speckled trout will require much less line capacity than a tarpon or billfish.  Also remember that the heavier the weight line, the more reel capacity it takes up.

Unlike most freshwater reels, saltwater reels are made of corrosion resistant materials to fight the harsh elements of saltwater. Despite that, the stainless steel and/or anodized aluminum materials still aren’t always tough enough to fight against these elements. To keep your supplies in top condition, make sure to clean your reel after every saltwater outing. You can use a  toothbrush to lightly scrub the reel inside and out with water and soap. Make sure to re-lubricate the reel as needed.

Enjoying Nature With Your Loved Ones

Hiking and Camping: The Perfect Combination